This is the phase during the maize crop cycle where each hybrid’s strengths and weaknesses start to become apparent.

What is often seen to be desirable for silage crops (e.g. height and bulk) may be undesirable for grain crops. The ideal grain hybrid is medium to medium-tall in height, with a reasonably low ear placement, preferably not much higher than half the height of the plant.

Strong roots and a solid stem add to a crop’s resilience during this phase as does good husk cover, ear rot profile and the speed at which the cob peduncles (shanks) succumb to gravity and allow the cob to point downwards, reducing the risk of grain spoilage due to moisture/rainfall and disease that follows if the grain gets wet.

The target grain moisture at harvest will depend on the market/end use, and can range from 28% to 18% with moisture above 20% often increasing drying costs significantly. Lower values increase the risk of losses both in-field and at the driers through disease etc. A safe medium is around 22% moisture where plant integrity is good, shelling is easy, handling characteristics are good, disease level is low, rier throughput is near optimal and losses are minimal.

Scouting during this growth phase is really about monitoring the integrity of the plant and forecasting any problems that might occur either due to pests, disease and climate related factors. If it looks as though a problem may be starting to occur, it probably is. The best thing to do is take stock, assess the situation, and if the risk is too high, seek advice and consider harvesting.

It’s also a good time to check for problem weeds at this time because they usually stand out among the dying maize plants. For problem or noxious weeds record the location of any hotspots not least as a reminder to scout these locations next season, but also to be armed with the knowledge of where to look for which weeds and to formulate strategies to tackle the weeds if/when they appear. 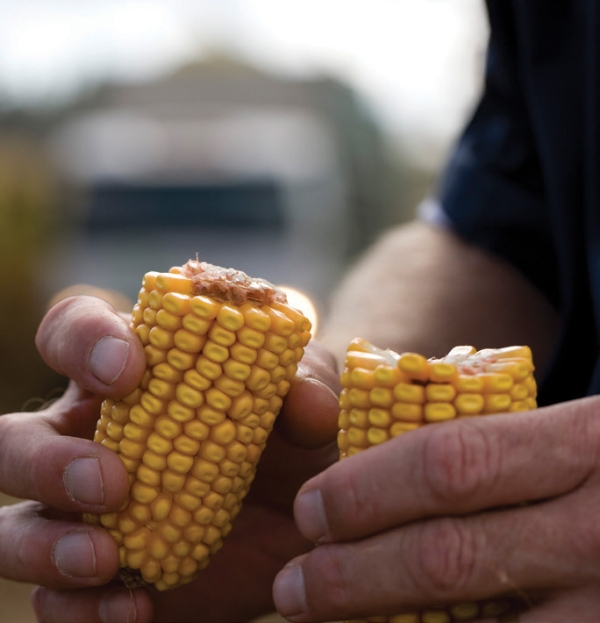 STALKS SNAP BELOW THE EAR >

STALKS SNAP ABOVE THE EAR >

HOLES APPEAR IN THE STALKS >

PLANTS FALLEN, EASILY PUSHED OVER OR PULLED OUT BY THE ROOTS >

GRAIN AT COB BASE WET OR SPROUTING >

GRAIN IN MIDDLE OR BASE OF COB SOFT OR DISCOLOURED >

HUSK AT TIP CHEWED OR OPEN >